Hey everyone, checking in once again.

I’m still knee-deep in finalizing the “progression” content of Stardew. It’s a pretty loose category of stuff that I’m working on… but my overall aim is to make sure players feel like they have direction and purpose when playing. This is especially important when you start a new game and haven’t yet established a thriving farm. For example, I’ve added a simple quest log: 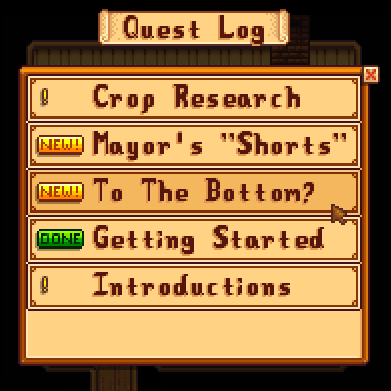 The word “quest” might convey the wrong idea, though; in Stardew Valley, questing isn’t a big part of the game. The quest log simply serves as an unobtrusive way to remind players of goals they might want to pursue. If you prefer to ignore it, you can certainly do that. However, the local townspeople will ask you to do things for them, and following through with their requests is a good way to make friends. The quest log will help you keep track of this.

I also added the pets. You don’t get them immediately, it’s something to look forward to:

They’ll make your farm and house a little more lively.

Other things I’ve added/improved in the last month:

I’m still committed to releasing the game this year. Once I’m done with the “progression” stage the game itself will be essentially finished. My next step will be to work on technical stuff. For example, the options menu, bugs, graphics issues, optimization, etc.