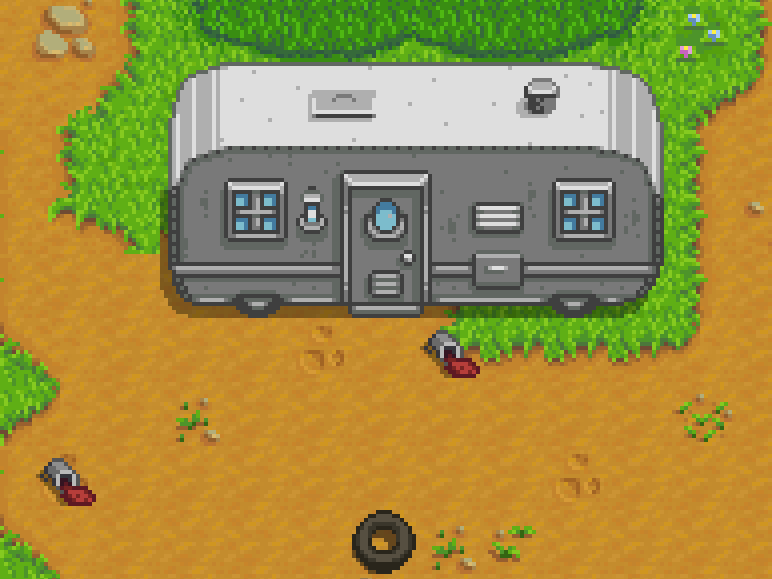 Hey, I know it’s been a while since the last update. The main reason is that I’ve been working on stuff that really isn’t that interesting or suitable for sharing (e.g. writing character dialogues).  But development  is still progressing as usual!

I know earlier this year I estimated that the game would be done before 2014. Well… I have to say that I will probably not be able to meet that estimate anymore.

I’ve always been a little uncomfortable giving release estimates for Stardew. It’s stressful to build up hope for a specific release date, knowing that I might have to disappoint everyone by pushing it back. And i’m definitely guilty of being a little too optimistic about development timetables. Ultimately, though… I think most will agree with me that a slow-cooked, polished game is better than a rushed, quick release.

How complete is the game? Well, there are still a couple of  features that I haven’t even begun yet… but, they all should be relatively minor in terms of development time. Other than that, there is a lot of polish and fleshing-out to be done before it’s ready. There are also some technical (i.e. not involving actual in-game content) things which I *might* need to do before release.

So, while the game is definitely “mostly done”, there are still plenty of things that need to be finished before I am comfortable releasing it. I am still working as fast as I possibly can without compromising on the quality of the game (and also while maintaining my own sanity, for those of you who saw me playing Terraria on Steam recently :p ). Thanks to all of you for being so patient, compassionate, and supportive during this process… I really do appreciate it!

Anyway, enough with the boring stuff!

Here’s a quick look at all the characters you can date/marry (minor spoilers in the form of character bios ahead):

Abigail lives at the general store with her parents. She sometimes fights with her mom, who worries about Abigail’s “alternative lifestyle”. Her mom has the following to say: “I wish Abby would dress more appropriately and stop dyeing her hair blue. She has such a wonderful natural hair color, just like her grandmother did. Oh, and I wish she’d find some wholesome interests instead of this occult nonsense she’s into.” You might find Abigail alone in the graveyard, or maybe out in a rainstorm looking for frogs.

Being wealthy and popular throughout high school has made Haley a little conceited and self-centered. She has a tendency to judge people for superficial reasons.  But is it too late for her to discover a deeper meaning to life? Is there a fun, open-minded young woman hidden within that candy-coated shell?

Growing up with a carpenter and a scientist for parents, Maru acquired a passion for creating gadgets at a young age. When she isn’t  in her room, fiddling with tools and machinery, she sometimes does odd jobs at the local clinic.  Friendly, outgoing, and ambitious, Maru would be quite a lucky match for a lowly newcomer such as yourself… Can you win her heart, or will she slip through your fingers and disappear from your life forever?

Leah lives alone in a small cabin just outside of town. She loves to spend time outside, foraging for a wild meal or simply enjoying the gifts of the season. She’s a talented artist with a large portfolio of work… yet she’s too nervous to display it to the public. Maybe you can give her a little confidence boost?

Penny lives with her mom, Pam, in a little trailer by the river. While Pam is out carousing at the saloon, Penny quietly tends to her chores in the dim, stuffy room she is forced to call home. She is shy and modest, without any grand ambitions for life other than settling in and starting a family. She likes to cook (although her skills are questionable) and read books from the local library.

Sebastian is a rebellious loner who lives in his parents’ basement. He is Maru’s older half-brother, and feels like his sister gets all the attention and adoration, while he is left to rot in the dark. He tends to get deeply absorbed in computer games, comic books, and sci-fi novels, and will sometimes spend great lengths of time pursuing these hobbies alone in his room. He can be a bit unfriendly to people he doesn’t know. Could a charming new farmer cultivate the wasteland of his heart? Who knows?

Josh loves sports and hanging out at the beach. He is quite arrogant and brags to everyone that he is going to be a professional athlete. Is his cockiness just a facade to mask his crushing self-doubt? Is he using his sports dream to fill the void left by the disappearance of his parents? Or is he just a brazen youth trying to “look cool”?

Elliott lives alone in a cabin on the beach. He is a writer who dreams of one day writing a magnificent novel. He is a sentimental “romantic” with a tendency to go off onto flowery, poetic tangents. When he can afford it, he enjoys a strong beverage at the saloon. Could a humble farmer such as yourself be the inspiration Elliott is looking for? There’s only one way to find out…

Harvey is the town doctor. He’s a little old for a bachelor, but he has a kind heart and a respected position in the community. He lives in a small apartment above the medical clinic, but spends most of his time working. You can sense a sadness about him, as if there’s something he’s not telling you…

Sam is an outgoing, friendly guy who is brimming with youthful energy. He plays guitar and drums, and wants to start a band with Sebastian as soon as he has enough songs together. However, he does have a habit of starting ambitious projects and not finishing them. Sam is a little stressed about the impending return of his father, who has been away for years due to his line of work.